The patient is a 66-year-old female initially treated in 2012 with lumpectomy, sentinel node biopsy, adjuvant chemotherapy and adjuvant whole breast/regional nodal radiotherapy for pT1N1M0 right invasive ductal carcinoma. She remained without evidence of disease for several years after this initial treatment.

Locoregional recurrence of invasive breast carcinoma, including recurrence within the previously irradiated right breast and the contralateral axilla.

To achieve local control, the patient underwent a bilateral mastectomy (removal of both breasts) with left axillary dissection in January 2020.

Pathology from the right breast revealed a grade 2 infiltrating ductal carcinoma with lobular features of the right breast, 2.6 cm in greatest dimension, with final clear margins, with extensive lymphovascular invasion. The left breast did not contain any cancer, but the left axilla revealed that 12 out of 15 lymph nodes were positive for cancer. The largest deposit was 1.5 cm, with extracapsular extension.

Based on the presence of 12 malignant lymph nodes in the left axilla and the probable route of spread through the lymphatic system, the patient remains at significant risk of further relapse of cancer in her left chest wall and regional lymph nodes, including internal mammary, axillary and supraclavicular stations.

Proton therapy was utilized to cover the left chest wall, internal mammary, axillary and supraclavicular regional lymph nodes to 50 Gy in 25 fractions over five weeks. Proton therapy allowed for coverage of the above targets, with minimal to no overlap of previous right breast tangential radiation therapy fields.

The sparing of the heart using proton therapy can be seen in these captured images: 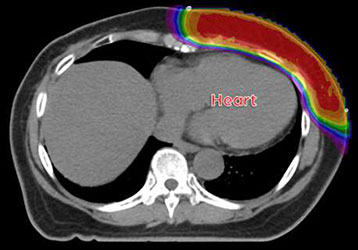 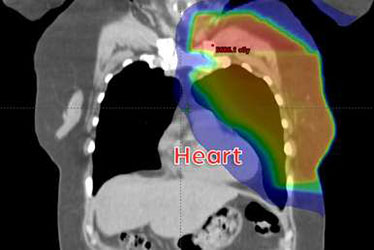 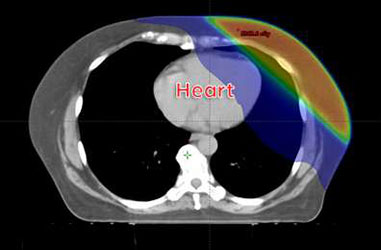