An implantable cardioverter defibrillator (ICD) is a device that monitors and moderates your heart rate. It uses batteries to send electric signals to a heart that’s beating too slow, similar to a pacemaker. The device can detect irregular heart rhythms (arrhythmias) and deliver a jolt of electricity to return your heartbeat to a normal.

Inova uses the Boston Scientific S-ICD® System, the world's first and only commercially available subcutaneous implantable defibrillator (S-ICD) to treat patients at risk for sudden cardiac arrest. An Inova patient received the first such device in the Northern Virginia and DC metro area.

S-ICDs offer the same lifesaving benefits as a traditional defibrillator but with lower complication risks since no electrodes or leads are placed into the heart itself. S-ICDs are only used for patients who do not also require a pacemaker for slow heart rhythms.

Traditional implantable cardioverter-defibrillators (ICD) sit in the chest and send a shock to the heart when they sense an abnormal rhythm. Inova cardiac surgeons place the device below the skin and connect it to the heart with electrodes.

How do implantable cardioverter defibrillators work?

This device is designed to deliver two levels of electrical energy. A low energy shock can convert a beating heart that is in an abnormal rhythm back to a normal heartbeat. A high energy shock is delivered if the arrhythmia is so severe that the heart is only quivering instead of beating.

History of the ICD

The first ICD was approved for implantation in the United States in 1985. At that time, it was indicated only for patients who had a documented cardiac arrest or life-threatening arrhythmia. The implantation of these devices was difficult and required electrodes to be placed directly on the surface of the heart. The device itself had to be placed in the wall of the upper abdomen as it was too large to be placed in the chest.

By the early 1990's, the devices no longer required wiring directly on the heart, but allowed for wiring that went through the vein to the inside surface of the heart. This made the implant procedure much easier and the recovery much quicker (just overnight).

The technology further improved to allow the devices to be smaller, which allowed implantation in the upper chest, like a pacemaker, instead of in the abdomen.

Around this time, the first seminal studies of defibrillators were complete. These studies evaluated ICDs for patients who had not yet had a life-threatening arrhythmia, but were statistically likely to develop one. The first such study, MADIT, took patients with a weakened heart from coronary artery disease. All patients received the best medical therapy. Half the patients received a defibrillator and half did not. The group that implanted a defibrillator lived longer. The second major study, called SCD-HeFT, took patients with a weakened heart from any cause. Again, the group that received a defibrillator lived longer. Since that time, CMS approved the ICD for Medicare patients at high risk for a cardiac arrest. Other commercial insurers followed by expanding their coverage policies.

Over time, the technology of ICDs has improved. They are essentially implantable computers that keep track of a patient's heart rhythm by pacing (protecting from slow heart rates) and treating fast rhythms. For example, they can pace-terminate a fast rhythm called ventricular tachycardia without resorting to a shock. In fact, the device could detect and treat a life-threatening arrhythmia without the patient even knowing. ICDs can also pace both sides of the heart for patients with conduction problems that benefit from biventricular pacing. 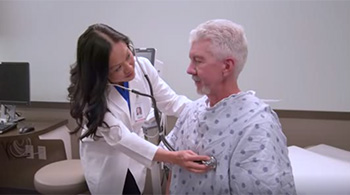 Conditions Treated by the ICD

Implantable cardioverter defibrillators (ICD) are advised in specific patients who are at risk for potentially fatal ventricular arrhythmias, an abnormal rhythm from the lower heart chambers which can cause the heart to pump less effectively. There may be other reasons why your physician advises placement of a pacemaker or ICD.