Bringing Hope and Healing to the Patients We Serve.
Contact Us
Contact Us
For Patients & Visitors
Translate

Stories from Our Rehab Patients 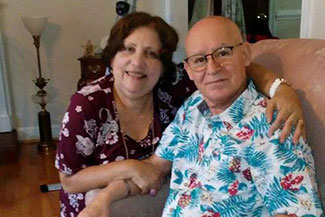 Several members of the Inova Mount Vernon Hospital Outpatient Bridge and Neuro Rehabilitation team listened as Reverend Angel M. Martínez delivered a sermon. Then, without missing a beat, Martínez reached for his guitar and accompanied his wife, Reverend Lydia Rodriguez, in joyful song. 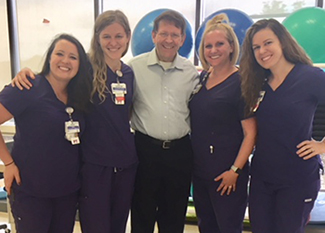 "Because I am an idiot." That was my answer when each healthcare professional asked me how I ended up in the hospital. In September 2017, I dropped a medium size pine tree on my head that I had cut down and had become hung up with a smaller tree. I have no memory of it, but it left me laying on the ground paralyzed from the neck down. By the time the first responders arrived, 2-3 hours later and shortly after my wife found me, I could move my left leg and left arm at the shoulder and elbow. A week and a half and a surgery later, I was rolled into Inova Mount Vernon Hospital Inpatient Rehabilitation Center. That is where my return to life took flight.

George Leach: From Team Member to Patient and Back

George is a member of the Inova Family. After a rare neurological disorder, Guillain-Barré syndrome, left George paralyzed from the neck down, he unexpectedly gained a patient perspective. George tells us why he is so proud to be a part of the Inova Mount Vernon Team.

After Sue had a stroke, she found herself unable to perform daily self-care, walk, or speak. Sue tells us how therapy helped her move forward and feel like herself again. 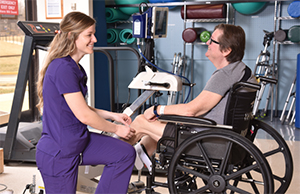 Support the work of the Inova Rehabilitation Center
Donate

What People are saying about Inova Mount Vernon Hospital Rehab:

Great teamwork and communication. Nurses communicated with each other and with therapists about patients so that everyone was on the same page. I heard that a lot in passing and also between the therapists at the gym, they gave each other updates on patient status and I thought that was really good.

Everybody was outstanding, that is why she wants to continue outpatient therapy there. There is nothing you all need to improve – you guys are awesome!

I had a really good nurse. He went above and beyond what was expected. He took the extra time to answer all my questions and explain everything about my medication. Whenever I had questions, he got back to me in a timely manner; he really did an excellent job.

The doctors did more for me than any other hospital I have been to.

We were very impressed with our case manager. She was well prepared with all the information that we needed and she was on top of it all.

My therapists were exceptionally good. They got me up and out of bed doing things that I never thought I would do.

My OT was absolutely fantastic and got me laughing and ready for therapy no matter what mood I was in.

The techs played such a central role in my healing and recovery. They gave me a sense of confidence.

My doctor was wonderful. He had such a calm demeanor and made me feel very comfortable. I felt like I could ask him anything and he would give me the most honest answer.

The communication was very good. The therapists and nurses worked really well together and always knew what was going on.

You all did an awesome job. It was like a well-oiled machine. I was so impressed with the organization and the fact that everyone was on the same page.

All staff did a good job. I will say gold stars for everybody. There’s nothing I can suggest that you could have done better, your hospital was a breath of fresh air.

Inova Mount Vernon Hospital rehab is the best in Virginia and there is no other rehab like yours. You have the best in nursing care, therapy and overall staff

The nursing staff was kind, thoughtful, friendly and professional. This really enhances your stay and recovery.

I was very encouraged and they always raised my motivations up! Best PT team ever!

My case manager was so great! She responded whatever I asked or questioned, she got back to me right away, and cleared my issue up quickly.

I would recommend your facility to anyone needing rehab care. Excellent center.