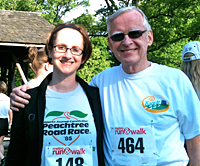 I am one of the worst golfers in the world, but have always enjoyed the game. My PCP told me that for golf to count as exercise, I would have to use a pull cart. So I did, but found over several years that it was harder to walk the long, uphill fairways. I attributed it to being in poor condition, so I joined a gym. I did pretty well at first but soon found that after each exercise I walked to the water cooler, supposedly for a drink, but actually to catch my breath.

In December 2008, I realized that I was probably sick. My PCP called it a head cold, bronchitis or whatever and prescribed antibiotics and cough medicine. He even had me take a stress thallium test to rule out a heart condition. No luck there, so next came a CT scan. The radiologist’s letter said “indication of pulmonary fibrosis." I asked my PCP to put that into English, but he said that it was hard to explain (chicken). He sent me to a pulmonologist who confirmed that I had some form of PF but had to rule out possible other causes. He had oxygen delivered to my house that night. After seeing more docs to rule out other possibilities, he sent me to Dr. Nathan at Inova Fairfax Hospital.

Dr. Nathan confirmed that I had end stage IPF, the worst possible, and said I needed a lung transplant or I wouldn’t be around in a year. He said that I needed to have a bunch of tests to show that I was strong enough for the surgery. He said that insurance companies like for a patient to have these tests performed on an outpatient basis, which gives the hospital’s rehabilitation program time to strengthen up the patient for surgery. “In your case," he said, "I don’t even want you to go home. Get admitted and we’ll give you all the tests here over the next few days.”

And that’s what I did. The next week I was placed on the UNOS list and two weeks later in April 2009, I was called to the hospital for transplantation by Dr. Speir. God bless my donor and donor family for their gift of love. And God bless the docs, nurse practitioners and staff at Inova Fairfax, my home away from home.

Recovery was a slow, arduous process. Luckily I have a wonderful wife who looked after me and a great family to help me along. A couple of complications sent me to the ER twice and I was readmitted to the hospital 9 months later with abdominal fluid buildup for returning to work too soon. But my new lung helped me through it all, causing no problems.

At first, I could hardly walk but after two years, I walked in the Washington Regional Transplant Community 5K walk/run. My daughter joined me but I warned her that we would finish dead last . She said that dead last trumped not doing it at all. Well, I was right – dead last. My daughter took a picture of me finishing with nothing behind me except the sweep vehicle.

I still wrestle with other physical problems, but my new lung works just fine.